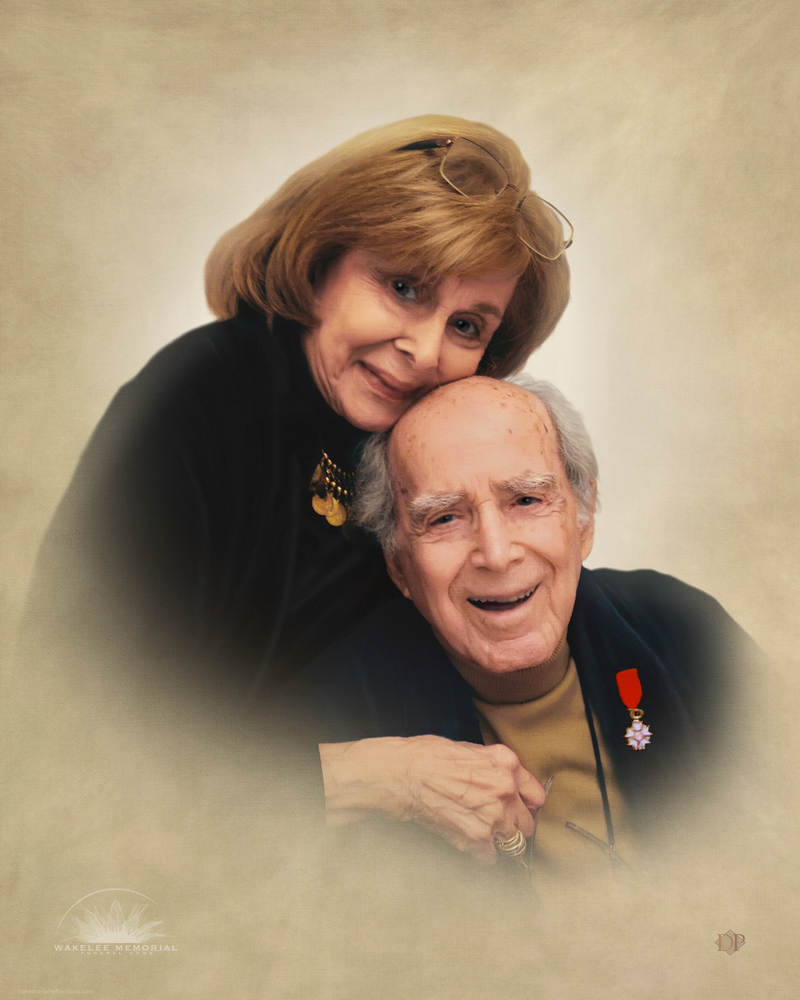 Share this Tribute:
Share Obituary:
Share Your Memory of
Sperie P. and Natalie "Nikki"
Upload Your Memory View All Memories
Be the first to upload a memory!

Sperie Peter Perakos and wife Natalie (Nikki) Pappas Perakos of Orange, CT, inseparable and united for over 60 years, died respectively on April 5th and April 24th 2021.  Both passed peacefully with loved ones at their sides.

Mr. Sperie P. Perakos was born in New Britain, CT, son of the late Peter G. and Julia Ladany Perakos.  He was a graduate of Yale University, Pierson College Class of 1938.  While later attending Harvard Law School, he was required to return to CT to assist in the family’s theater business, founded by his father. Sperie Perakos enjoyed a long and successful career as President and CEO of Connecticut Theatre Associates, owning and operating exhibition theatres throughout CT, MA and NJ.  Mr. Perakos was a U.S. Army Veteran of WWII, serving as a Captain in Intelligence in the 448th Antiaircraft Artillery Battalion which participated in the Normandy invasion, specifically at Utah Beach. The 448th subsequently attached to the 35th Infantry Division (part of General Patton’s 3rd army).  The 35th Division advanced through France with many undertakings including the Battle of the Bulge.  Mr. Perakos also flew in surveillance planes to assist in mapping areas where troops would be posted.  Mr. Perakos’ work in intelligence involved collaboration with the French Resistance and the French Free Forces.  The 35th often assisted local populations and at the end of the war was in Germany for peacekeeping.  Mr. Perakos received a Bronze Star and other honors for his service in WWII.  Given his service for the war effort in France, he was awarded the insignia of Knight of the National Order of the Legion of Honor by the Deputy Consul General of France, Damien Laban, in October 2020.  Mr. Perakos was proud of his Alma Mater.  He was a fellow of Pierson College and active with Yale University throughout his life as member of many boards. Especially worthy of note was his dedication to the Peabody Museum of Natural History; as a president, chairman and member of its Board of Associates for numerous years and as a contributor to their collections.  He was also close to the Yale School of Drama often organizing initiatives and visits from leading personalities of the time such as Otto Preminger, Norman Jewison, and others.  Mr. Perakos remained active as the secretary for his class of 1938.

Mrs. Natalie (Nikki) Pappas Perakos was born in Detroit, MI, the first child of George Harris Pappas and Sophia Taxintar Pappas.  Nikki studied at the Detroit Conservatory of Music and with Marcus Kellerman.  During that time, the distinguished opera theatre of Milan-Italy, Teatro alla Scala, had offered her a full scholarship which she declined in order to stay close to her family. She was the youngest member of the Michigan Opera Company and appeared as soloist with the Detroit Symphony Orchestra.  Upon her marriage to Mr. Perakos, she moved to New Haven where she studied with Benjamin DeLoache at the Yale School of Music and Constance Welch at the Yale School of Drama.  Her acting endeavors included television and theatre productions.  Nikki was the first woman to be appointed to the Yale Alumni Association where she served for five years.  As well, she enthusiastically aided her husband Sperie in his Yale activities and initiatives which included the planning of many class reunions.  For her dedicated efforts, she had become a fellow of Pierson College.  She was close to the Social Science Club of which her husband was a longstanding member. Nikki also assisted her husband for the column he wrote in Class Notes, the Yale Alumni Association’s magazine, until the end of their lives.  Throughout her life, Nikki was a patron of the arts, music and performing arts.  She volunteered for associations such as the New Haven Symphony, the N.Y. City Opera Guild and for charitable organizations such as the Arthritis Foundation.  She contributed to the Metropolitan Museum of Arts’ Costume Institute Collections, notably with the last Butterfly Dress created by Charles James in the 1950s.  Although she had her own business in design, she was often at her husband’s side with his theatre circuit work.  Given their longstanding involvement in the sector, they were also active in the Connecticut Association of Theatre Owners (CATO) for many years.

Mr. Perakos was assisted by his wife Nikki in the production of the 1961 film “Antigone”, starring Irene Papas and members of the Royal Greek Theatre.  The film was acclaimed internationally.  Recently, the couple chose the Film Archive of the Academy of Motion Picture Arts and Sciences to be the permanent home for “Antigone”.

Mr. and Mrs. Perakos were devout in their faith and longtime parishioners of St. Barbara Greek Orthodox Church in Orange, CT.  Mrs. Perakos was a member of the Greek Orthodox Ladies Philoptochos Society, a charitable and benevolent association active in a multitude of programs.   The couple were both proud of their Greek heritage.  Mr. Perakos served as a past District Governor and lifetime member of the American Hellenic Progressive Association “AHEPA”, an association promoting ancient Hellenic ideals such as education and philanthropy through community service and volunteerism.  He was Mason, and member of the Hiram Masonic Lodge #1 - New Haven. The couple loved life and were inseparable.  They brought much love, wisdom and joy to those their lives had touched.  They will be missed greatly.  They are survived by a Goddaughter, Cassandra Pappas, as well as several nieces and nephews.  Mr. Sperie P. Perakos is survived by sisters-in-law, Urania K. Perakos and Marilyn Perakos, both of FL. He was predeceased by a sister, Artemis Perakos-Miller; and brothers, Dr. George Perakos, John P. Perakos, Atty. Steven E. Perakos, and Peter (Socky) G. Perakos, Jr.

Funeral services will take place on Tuesday, May 4, 2021 at 10:00 AM at St. Barbara Greek Orthodox Church, 480 Racebrook Rd., Orange, CT.  Family and friends may call at church from 9:30 to 10:00 AM, prior to the service.  To view the funeral service online, please visit www.saintbarbara.org/live_services/.  Interment with Military Honors will follow in Grove Street Cemetery, New Haven and can be viewed online at www.facebook.com/WakeleeMemorial. Memorial contributions may be made to St. Barbara Greek Orthodox Church.  The Wakelee Memorial Funeral Home, 167 Wakelee Avenue, Ansonia, is in care of arrangements.  Online condolences may be made at www.wakeleememorial.com.

Get Directions
Tuesday
4
May

Get Directions
Tuesday
4
May

In lieu of flowers, Memorial Contributions may be made to St. Barbara Greek Orthodox Church, 480 Racebrook Rd., Orange, CT 06477