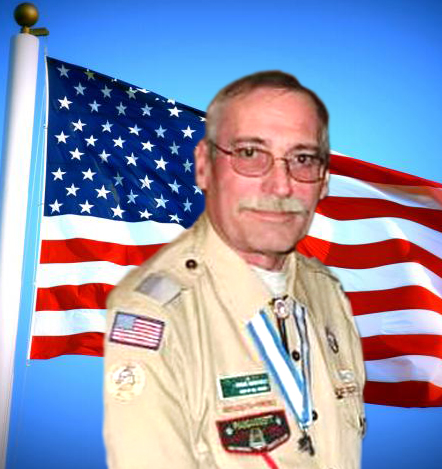 Charles, “Chuck” Jay Hemstreet, Sr., age 67 of Seymour, beloved husband of Kathryn A. Schrade Hemstreet, died peacefully at home on September 1, 2020.  Born in Derby on January 28, 1953, he was the son of late Donald Allison and Mary Ann (Mulry) Hemstreet. Mr. Hemstreet was raised in Derby & Seymour and was a member of the first graduating class of Emmett O’Brien Technical High School, Ansonia. He worked as an electrician in the foundries of the Valley, as well as simultaneously working as a self-employed, electrical contractor, until the time of his retirement.

At an early age, Mr. Hemstreet found his passion for scouting when he joined Pack 3, sponsored by Derby Methodist Church, as a Cub Scout. He advanced to BSA Troop 3, sponsored by the Derby 2nd Congregational Church, where in 1971 he became the troop’s 146th Eagle Scout.  Later, he then joined the BSA Explorer Post 33, of Derby.  As an adult he continued his involvement in scouting and became an Assistant Leader of BSA Scout Troop 3, Leader of Explorer Post 33 and was a founding member for the Order of Arrow, Paugassett Lodge 553. Throughout his scouting career, Mr. Hemstreet received many awards, such as the Silver Beaver, the Camp Alumni Award, the Order of the Arrow Founder’s Award, the James E. West Endowment Fellowship and the “Three for Life” Award.  Mr. Hemstreet was recently presented with the prestigious, Long-Life Scout Award by the Housatonic Council, BSA.  He enjoyed spending time and volunteering numerous hours at the Edmund D. Strang Scout Reservation of Goshen. For many years, he devotedly supervised the dining hall kitchen and provided numerous electric upgrades throughout the entire reservation. Ever true to the Scout Law, Mr. Hemstreet “helped other people at all times”; always placing the needs of others before his own. He will be long remembered as a leader and mentor for generations of scouts.

In addition to Kathy, his beloved wife of 47 years; he was most proud of his children, Charles J. Hemstreet, Jr. and his wife Jennifer of Beacon Falls, Marycatherine E. Hemstreet of Seymour, Alison A. (predeceased by a son-in-law, Jason Mislosky) Mislosky of Florida and Jay W. Hemstreet and his significant other, Michelle CaDevid of Rhode Island. He is also survived by four cherished grandchildren, Danielle Mislosky, Skylynn, Sakora and Forest Hemstreet; sisters, Catherine Saxton of Hamden, Margaret Fulkerson of Florida; brothers Donald and Thomas Hemstreet of New York as well as several nieces and nephews.  A Memorial Mass will be celebrated on Tuesday, June 22, 2021 at 10:30 AM in the St. Augustine Campus of St. Nicholas Parish, 35 Washington Avenue, Seymour, CT.  The Wakelee Memorial Funeral Home, 167 Wakelee Memorial Avenue, Ansonia. Interment will take place in Prospect Hills Cemetery, Guilderland, New York.

In lieu of flowers, memorial contributions may be made to the American Diabetes Association