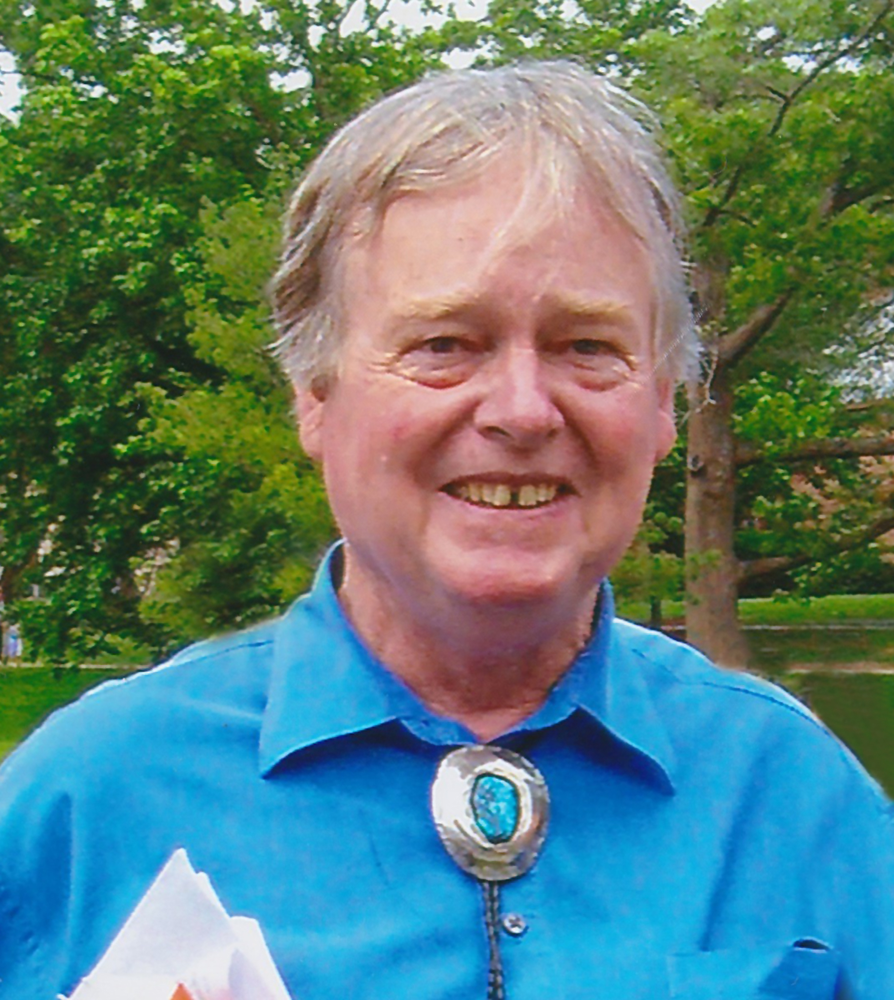 Please share a memory of Patrick to include in a keepsake book for family and friends.
View Tribute Book

Dr. Patrick Russell Ryan, professor of Writing and professor emeritus, died in the hospital on June 2 at age 69 after a long battle with peritoneal mesothelioma cancer. He was surrounded by his loving wife and two children.

In the winter of 1979, Patrick met Hermelinda (Linda) Walking Woman on a blind date. Decades later, he’d recall that evening:

“It was already dark … and the streetlights cast a purplish tint over the scene, a faint purple dispelled by the lustrous black of Linda’s hair as she sprang from her mother’s rusted Caddy. She had cut and styled her own hair, straight silken strands arrayed in bangs sloping from her forehead to the nape of her neck. Her strong nose and black eyes emerged from the shadows as she marched straight toward us. She looked at me through the window; a smile raised the corners of her eyes. ‘I knew you’d be my husband,’ she told me later.”

She was right. Patrick and Linda were married for 39 incredible, beautiful years. Together, they raised two children—Darcie and John—and had a grand adventure across the world. Most importantly, from the moment the pair locked eyes through a streaky car window until Patrick took his last breath in Linda’s arms, they loved, supported and respected each other completely. In Linda’s words, "He was my constant partner. I knew he would always be there for me and the children, as he was an exceptionally decent man, a true example of a loving husband and father, and an overall good and caring person."

Patrick excelled as a father, and as a result, his children thrived. He was a champion of their happiness and dreams. When seven-year-old Darcie wrote a “novel”, Patrick edited every page. Over two decades later, he was the first person to read her debut book, which was dedicated to him. After developing a passion for classical music in college, Patrick started a vinyl collection that amassed over 300 records, including pieces by Verdi and Beethoven. However, some of his favorite music was composed by his son. In fact, John’s music greatly comforted Patrick in the hospital.

Born in Yakima, WA, and raised in Sequin, TX, Patrick had a passion for learning. He earned a B.A. in English from St. Mary's University in San Antonio, an M.Ed. in Curriculum and Instruction from Texas A&M University in College Station, and an M.A. in English Literature from the University of North Texas in Denton. In 1999, Patrick obtained a Ph.D. in English at the University of Iowa. He was known for his witticism, kindness, humor, and intellect, including his prodigious knowledge of many things, such as the English language, history, classical music, religion, and Renaissance literature. He generously volunteered his talents in writing, history, and policy to help the Lipan Apache Tribe (his wife and children's tribe) as an advisor, writer, and editor. He enjoyed talking to new people, sincerely interested in learning their stories. Notably, Patrick never failed to remember facts about the people he met, such as the type of dog they had or the schools they or their children attended.

He taught at the University of Minnesota-Morris, Indiana University at Shah Alam, Malaysia, the University of Iowa, Castleton State University, Texas A&M-Texarkana, and most recently at Western Connecticut State University (WCSU). Hired as Coordinator of Freshman Composition in 2007, Patrick served the WCSU Writing Department and the entire university in this capacity and many other ways. He was active in the Bridge Program, which provided middle- and high-school students with consolidated university courses. He was also involved with the school’s Educational and Achievement Access Program (EAP), which helps at-risk students get a chance to attend the university. Patrick coordinated Connecticut State University’s online tutoring for several semesters, as well as the WCSU Tutoring Resource Center, all the while remaining active in the classroom. As Writing Lab Coordinator for several years, Patrick managed tutoring for university students in need of composition assistance. He networked with Danbury High School’s Early College Program and served as faculty advisor for some student publications. Patrick also served as Writing Department Chair for several years and used his negotiating skills to work with other university colleagues and administrators to build stronger connections between Writing and other disciplines and retain Writing as a distinct major.

Patrick enriched the lives of his family and friends through his conversations, humor, and insight. He enjoyed taking leisurely strolls, cooking for his family, and watching cozy mysteries such as Murder She Wrote and Columbo. His shoulder was always available as a perch for his little birds Pumpkin and Sunflower. Above all else, Patrick lived to uplift the people he loved. As Linda lovingly noted, he was a genuinely a good man.

Patrick is survived by his wife Linda; his devoted children, Darcie and John; his son-in-law T Drake-Hueston; his sisters Kathryn Turner and Keri Arrage; and his brothers Timothy Ryan and Thomas Ryan. He was predeceased by his father and mother, John and Jean Ryan and his brother Michael Ryan.

Thank you to the The Wakelee Memorial Funeral Home, 167 Wakelee Avenue, Ansonia, CT 06401, for their compassionate care of Patrick and for taking care of arrangements. Online condolences may be made at www.wakeleememorial.com.