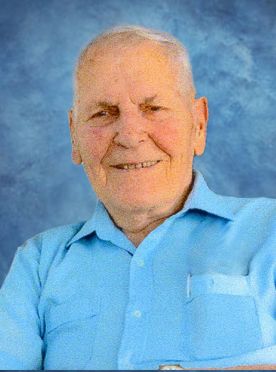 John Sosenko, age 94 of Shelton, beloved husband of the late Helen Sholtys Sosenko, died peacefully on April 7, 2019 in the comfort of his home with his family by his side.  Born in Shelton on January 7, 1925, he was the son of the late Joseph and Akila Labowski Sosenko.  Raised on his family’s farm, Mr. Sosenko was a lifelong resident of Shelton and member of Sts. Peter and Paul Church of Ansonia.  He was a 1942 graduate of Shelton High School and a proud WWII Veteran of the U.S. Army where he served overseas in the European Theater of Operations for ten months as a rifleman in the North Apennines and Po Valley campaigns with the F Company, 87th Mountain Infantry. Employed as a skilled tool and die maker, Mr. Sosenko worked for the Weimann Brothers Manufacturing Co. of Derby for over 40 years, prior to his retirement in 1990. He was an avid gardener and member of the Shelton Senior Center, the American-Russian Citizens Club of Shelton and enjoyed jaunts to the casinos, traveling and dancing.  He is survived by his devoted daughters, Nancy (Walt) Saja of Shelton and Patricia (William) Synnott of Lake George, NY; cherished grandchildren, Michael (Cheryl) Saja of Shelton, William (Marivel) Synnott of VA, Tara McGrath of Waterbury, John (Nav) Synnott of CA, Mary (Ronald) Turmel of Watertown, and Patricia Synnott of AZ; great-grandchildren, Tiffany Synnott of VA, Nico (Emily) Synnott of AR, Ashley (Chad) Harris of VA, Dillon McGrath of VA, Taylor and Dakota Saja of Oxford, Arya Synnott of CA, and Remington Turmel of Watertown; and great great-grandson, Oliver Harris of VA.  He is also survived by a dear companion, Frances Allegrini of Middlebury.  In addition to his wife of 42 years, he was predeceased by beloved grandson, Andrew Saja and brothers, Peter and William Sosenko.  Funeral Services will take place on Thursday, April 11, 2018, at 10:30 AM from the Wakelee Memorial Funeral Home, 167 Wakelee Avenue, Ansonia.  A Mass of Christian Burial will be celebrated at 11:00 AM in Sts. Peter and Paul Church, 105 Clifton Avenue, Ansonia.  Interment with Military Honors will follow in St. Peter and Paul Cemetery, Derby.  Family and friends may call on Thursday morning at the funeral home from 9:00 to 10:30 AM, prior to Mass.  Online condolences may be made at www.wakeleememorial.com.

Share Your Memory of
John
Upload Your Memory View All Memories
Be the first to upload a memory!