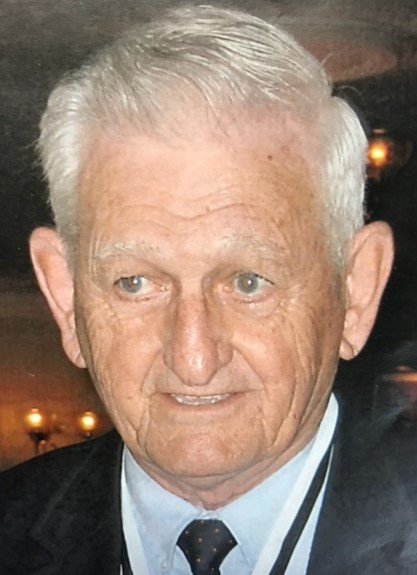 4:00 pm - 7:00 pm
Church Of The Assumption
61 North Cliff Street
Ansonia, Connecticut, United States
Due to the construction on Wakelee Ave. Calling hours will be at the Church

Jim was born on May 16, 1928 in Derby CT to John and Elizabeth Carey. He received his undergraduate degree from American International College where he played basketball and football and went on to receive his master’s degree from the University of Hartford. Jim was a teacher and coach at East Hartford and Trumbull High School for 40 years, before retiring in 1989.  He was pre-deceased by the love of his life Barbara Stanko Carey and his oldest daughter, Susan.  Jim and Barbara were married for 58 years.

Jim was a well-known sports figure in southern Connecticut.  He played, coached and officiated baseball, football, basketball, track and softball for over 50 years.  At Derby High School, he lettered in football, basketball and baseball and was captain and leading scorer when the team finished 2nd in the 1945 CT State Tournament.  He served his country proudly during WW II as a member of the US Navy. He began his teaching and coaching career at East Hartford High School in 1949, where he was head track mentor and assistant football coach.  After East Hartford High, his career brought him to Trumbull High School where he served as Chairman of the Business Ed Department and continued his love of coaching with coaching roles in baseball, football and women’s track. When his playing and coaching days were over, Jim held many leadership positions and officiated  high school and college games for over 45 years.  He was a member of the Western CT Football Officials Association, Valley Umpire Association and served as Vice President of the New Haven Board of Approved Basketball Officials, President of the Valley Umpire Association, President of the New Haven Basketball Association and President of the CT Football Officials Association (CFOA).  He was Program Director for the Valley CYO basketball league and served as Secretary Treasurer of CFOA. For 26

years Jim served as the Valley Commissioner for the CT ASA Softball Association. Jim was a founding member of the Valley Umpires Associates and in recognition of his service to the organization, the Outstanding Umpire Award is named in his honor.  In 2008, he was recognized as the official starter for the Annual Commodore Hull Thanksgiving Day road race.  He was inducted into the CT Football Officials Hall of Fame, CT Amateur Softball Association Hall of Fame, Trumbull High School Hall of Fame. In 2016  he was honored by the CT Football Officials Association with the Carey Community Service Award that is now presented annually in his honor.

Jim was a past member of the Shelton Board of Education and served on the building committee for the Shelton Intermediate School project.  He was Director of the Shelton Parks and Rec Department for 54 years where he served as a mentor to hundreds of college counselors and thousands of Shelton youth. He was a volunteer at the Shelton Community Center for 25 years with a group of amazing people that he considered his extended family.  It was a place where former co-workers, students and athletes of all ages would stop by just to say hello to “Coach”. In addition to his wife Barbara and daughter Susan, Jim was preceded in death by brothers Jerry, Jack, Bill, Tom and his sisters Ann and Mary.  He is survived by his children, James Carey (Linda), Ann Seitter (Chris), Lynn Chamberland (Randy), Thomas Carey and Judith Ahearn (Tim), son-in-law, John Trovarelli, grandchildren David (Julie), Christopher, Tyler, Olivia, Ryan, Maggie, Samantha, Riley, Trevor, Matthew (Mary), Gregory, (Jenna), Hannah and Jack and great grand-children, Liam, Bennett and Kensley.  He is also survived by many nieces and nephews.  He will be missed by all that knew him, including his friends, colleagues, and his students and athletes from East Hartford and Trumbull High School.

A funeral Mass will be held on Friday June 22, 2018 at 10:00 AM directly at the Church of the Assumption, at 61 North Cliff Street Ansonia, Connecticut 06401. Due to the construction on Wakelee Avenue, calling hours will be on Thursday June 21, 2018 from 4:00PM to 7:00PM at The Church of the Assumption, 61 North Cliff Street Ansonia, CT. Wakelee Memorial Funeral Home has care of James and his family. In lieu of flowers, donations may be made to: Judith Ahearn, for a scholarship fund in memory of James, for a deserving Valley High School Athlete.

Share Your Memory of
James
Upload Your Memory View All Memories
Be the first to upload a memory!