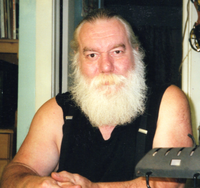 Robert W. Judd, age 67, beloved husband of Lynn A. Buynak Judd of Shelton, died peacefully at Griffin Hospital on October 16, 2021.  Born in Bridgeport on June 27, 1954, he was the son of the late Milton and Esther Chagnon Judd.   Mr. Judd was raised in Nichols and was a graduate of Trumbull High School.  Through the years, he was the owner & operator of several businesses including a tree service, a woodworking and cabinetry shop, a steel fabrication and T.I.G. welding service and lastly, a small engine repair service.  His interest and intrigue of small engines fueled his hobby of nitro boats, planes and cars.  Mr. Judd was an outdoorsman, he enjoyed hunting, fishing, firearms & target shooting and was a virtual encyclopedia of nature facts and trivia. An avid reader, he enjoyed classic authors like Henry David Thoreau and Ralph Waldo Emerson, as well as contemporary author, Tom Clancy.  Mr. Judd was a talented musician and enjoyed writing music and playing acoustic favorites on his guitar.  He will be long remembered for his freely given sage advice and as a father figure to many relatives and friends. In addition to his wife of 48 years, he is survived by his devoted sons, Benjamin J. Judd of Ridgefield and Zachariah R. (Hannah) Judd of Watertown; a brother, James (Patricia) Judd of Southbury; a cherished grandson, Benjamin Patrick Judd of Watertown; as well as several nieces and nephews.  He was predeceased by sisters Carol Judd Ruggerio and Nancy Judd Barlow.  Funeral services are private.  The Wakelee Memorial Funeral Home, 167 Wakelee Avenue, Ansonia is in care of arrangements.  See www.wakeleememorial.com.